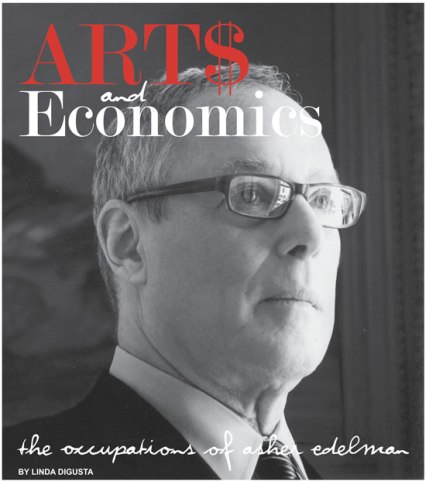 Asher Edelman can be described as standing, prominently, between 2 worlds. His Wall Street career, beginning in the 1960’s, in investment banking, money management and derivatives trading not only brought renown but enabled him to build significant collections of contemporary and Modern art as well as antiquities. In the same year, 1988, that he famously taught a course at Columbia called “Corporate Raiding – the Art of War,” (based upon the ancient Chinese military treatise by Sun Tzu), Edelman relocated to Switzerland and founded the FAE Musée d’Art Contemporain in Pully, where he presented the first major European retrospectives of artists including Roy Lichtenstein, Jean-Michel Basquiat, and Robert Mapplethorpe.

Currently in New York City, Edelman’s projects include Edelman Arts, which deals in Old Master through Post-War art in addition to representing contemporary artists, the art finance company ArtAssure Ltd., and the website AsherEdelman.com, where he writes about both finance and art from his unique depth of experience, enthusiasm and insight, which he also shared in conversation. His first acquisitions, Asher told us, “Were art books at Metropolitan Museum when I was 12, then some student work when I was 17. My first painting, I was 19 or 20, was from a fellow student whose name was, and is, Bill Tinker.”
Most recently, he added to his collection “A painting by Nabil Nahas who in my opinion is one of the 2 most interesting abstract painters developing a new slant on abstraction today. (Doug Argue is the other.)” What motivated his purchases then vs. now? “The motivation is the same, it’s a kind of drive that I really can’t define.”If he were to teach a class for artists about the economic realties of the business, Edelman told us, “I would certainly teach them how to get a public market for their work.” With the caveat, “This is talking money not art.” He continued, “Making sure to the extent that they can that there are successful auction records of their works. I would want them to be certain that their work was original, referential perhaps but still original, and suggest that they in their persona develop something original. I would focus on the commitment of a dealer not only to sell but to place it properly with collectors who will show and care about the art, to obtain museum representation, and to share with other dealers and not prevent the art from circulating.”

In a twist on what we usually can expect from the high-end art market and media, he emphasizes that “It troubles me to talk about art this way, it’s hard for me to mix actual art and economic realities. My brain is very divided. I am a collector and I adore art… when I am dealing with one I try to divorce my brain from the other.”

But Asher Edelman defies typecasting in any role. Ubiquitously identified with Wall Street, in his writings he weighs in positively on Occupy Wall Street. “I am optimistic for the economic and social outlook for the United States! During the next four or five years we will, once again, shift into gear. “Occupy Wall Street” will come to be thought of as “Save the Nation(s).” (1)

“I think in the short term it has focused Obama on his need to at least appear that he is interested in the common man,” he told us. “He gave that impression in his 1st run – I was a very serious supporter. During his tenure in office he has evidenced much less concern for the common man, much more interest in having arrived in the establishment and a seeming wish to remain there. He has ignored many of his promises including those related to preserving what we think of as democracy in this country.

“Occupy Wall Street and other grassroots groups will certainly influence how he runs for office. They will also influence those Republicans who have longed for the right once again to be moderate Republicans. It is likely that a vote may become more important than a dollar to those running for office… I believe we are seeing the beginnings of an important economic and sociopolitical change in America.” Does this mean that Asher Edelman is no longer a committed capitalist?

“The Occupy Wall Street crowd sees this as a problem with capitalism. I believe that they are correct in their target, but wrong in their diagnosis. This is not a problem of capitalism since Wall Street is a practitioner of monetarism. A real capitalist system works through real intermediation creating positive opportunities for productive enterprises…” (2).

“In a capitalist society, recoveries from recession and depression can only be brought about through a combination of fiscal and monetary stimulation,” he explained. Fiscal refers to government spending, for example on projects such as schools or roads, to spur the economy, monetary stimulation works through control of interest rates. “It is not a problem of capitalism that retards the recovery of the system, it is the focus on monetary stimulation and the lack of interest in fiscal stimulation that will continue to deter a recovery. Both are needed in times of stress.”

In other words, to build metaphorical bridges our economy and society need in order to recover, rather than tear down the existing system, we should well, build bridges. And what about the impact of the protest movement on art… is the street the new salon?

“Maybe,” Edelman said, “It certainly was in the 60’s, in the 70’s, and to a very small extent has been when addressing the torture [of prisoners] issue in 2000’s. Whether the artists are going to focus on social issues at this time, when abstraction is such a strong movement again, is doubtful.”

“The art world appears to be lost in the funhouse, and the fun is losing its fizz,” reads the press release for his recent exhibition at Edelman Arts, “Abstraction: What is Real.” It describe a “current shock-worn, étonné-by numbers climate…” Anyone who has attended a high-profile auction and watched the numbers on the bid board next to the mute object of the moment’s desire soar to the stratosphere can testify to how it stuns the senses and sensibilities of most mere mortals. And in that climate “Abstract art takes us totally by surprise.”

Elaborating, he explained that so many of the works sold at these stunning prices, “Warhol, Damien Hirst, Richter… are kind of manufactured… Nothing is wrong with manufactured art, but those who are really into in art, as opposed to having what their friends have, what some sharp dealer sold the group, or what some museum curator was influenced to buy, are going to have art that is above all original in its execution and idea. This once again includes abstraction, especially where the artist is progressing the art of abstraction.”

When asked if abstraction was on its way to the kind of dominance it attained in (and brought to) America in the mid-20th Century, where it was embraced to the point that many considered earlier American art to be “provincial,” (3) Edelman stated firmly that from his historical perspective, the public popularity of the movement had little to do with that attitude. “Americans at that time did not grow up with the iconography necessary to understand art before abstraction. It had everything to do with the fact that they could come to art, look at an image, and they did not have to bring anything with them to enjoy the image… sometimes you did not need iconography or knowledge to look.”

The same does not apply today. “Now that we have had 60-70 years of abstraction being a force, it has its own iconography, its own references, becoming complex in the way we think of Modern (1906-45). There are quite a few very good players, I only show some of them, who have found ways to change the face of abstraction, to be original again in the world of abstraction, which is not easy. If connoisseurs tended to be the winners in an immediate way, then abstract art would dominate again,” he concluded, but as far as the public is concerned, “It is only in the long term that we will understand the importance of this present generation of abstract artists.” “Abstraction: What is Real” was conceived as “a very specific show, the idea was to put together abstract work that has no reference to any figurative or representational art… I just wanted to do a ‘purified’ exhibition.” It also features several generations of abstract artists from the latest (Nahas, Argue, James Nares), back through artists who emerged later such as Frank Stella, Britt Boutros-Ghali, and Larry Poons (all still active), and their late forebears, Ashile Gorky, Fritz Bultman, and Michael Goldberg.

Also featured was an artist of that first wave who still paints today, Mary Abbott, who Asher first learned of while putting the show together.

Mary Abbott’s strong personal and professional relationship with de Kooning influenced his output to an astonishing degree. Abbott had experimented with abstract landscapes from her Southampton home for nearly five years by the time de Kooning began his own landscape series… As Abbott and de Kooning’s lives were intertwined, so too were their works which seem to share subject, technique, and even color palette…When it comes to Abstract Expressionism, the same auspicious names dominate: Pollock, de Kooning, Rothko, Motherwell, Gorky … Imagine a largely overlooked protagonist in this narrative, a crucial figure in the New York Post-war art scene whose story is only now surfacing. This new story is emerging and with it the understanding of the profound influence Mary Abbott had on the Abstract Expressionist movement and especially on her lover, Willem de Kooning.“ (4)

In the spirit of “the 99%,” we asked Asher how he would advise a would-be collector with $1500 or less to spend. He replied that he would give the same advice to a collector with a budget of $1500 or $15 Million: “Spend 2 days a week looking at art until he is confident that he can identify what is original, which is not possible without looking at art. Then come back to me and I will tell him what I think he should buy.”