Published on: May 11, 2016May 12, 2016Author: Asher Edelman
This New York Times article says a lot about restarting the system to make the people of America great. These ideas are not new. Only Bernie Sanders will institute them. Hillary’s financial backers will resist any and all as they perceive a threat within.
Asher Edelman

Government Must Play a Role Again in Job Creation 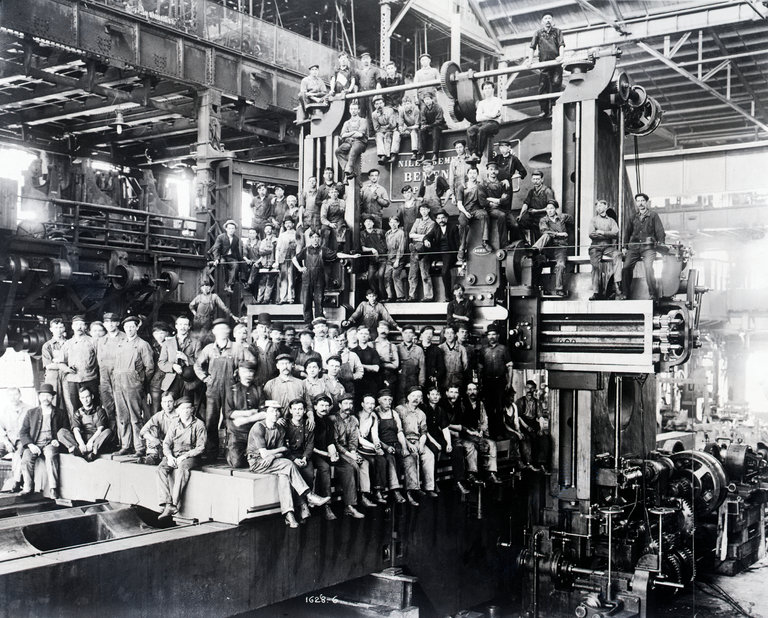 The workers of the Bement Miles Pond Company, circa 1920. The new industrial economy at the turn of the last century created jobs that were generally more productive and better paid than those it left behind. credit: Bettman Archives, via Getta Images

America has been here before.

At the dawn of the 20th century, the economy was already well into a fundamental transformation of the labor force, as industry replaced farming and crafts as the primary source of new jobs. The shift was painful, spawning protest movements and political forces like progressivism. But the United States emerged from the turmoil far more prosperous and powerful.

Notably, the jobs of the new industrial economy were generally more productive and better paid than the jobs it left behind.

The nation is well on its way through a second transition, this time to a postindustrial economy with little factory work to be had. Even as industrial production has grown, the economy has shed seven million manufacturing jobs since 1980. Manufacturing’s share of employment has shrunk to 8.5 percent of nonfarm jobs from a peak of nearly 27 percent in 1920.

For politicians on the campaign trail and in Washington struggling to come up with a credible strategy to improve the fortunes of America’s understandably angry working class, that shift poses an unanswered question: Where will new, better jobs come from?

Epochal transformations like these are complicated. They are difficult to understand, let alone manage, and are driven not only by domestic forces but also by global dynamics over which American politicians have limited control. During much of the 19th and 20th centuries, government at multiple levels played an essential role in shaping the nation’s transition from farms and small towns to cities and factories. It could do so again. What has stopped it is not the lack of practical ideas but the encrusted ideological opposition to government activism of any kind.

The construction jobs once fueled by the housing bubble that burst so violently in 2008 are unlikely to return anytime soon. The jobs picking up the slack today are in retail sales or cleaning buildings, paying little more than $26,000 a year; they are cashier positions paying $21,000, or food-prep jobs paying less than $20,000.

Some growing occupations pay a decent wage: registered nurses earn $71,000 a year, on average. But these examples are the exception, not the norm.

Though the decline of well-paid working class jobs is often portrayed as the inevitable consequence of globalization and technological change, it is in large part the result of a failure of government.

An observation has recently popped up in the academic debate — in books such as “Concrete Economics” (Harvard Business Review Press) by J. Bradford DeLong and Stephen Cohen, and in “American Amnesia” (Simon and Schuster) by Jacob S. Hacker and Paul Pierson. They point out that for all our love of rugged individualism, government played a large and underappreciated role in reshaping the American economy before — and it could do so again.

Start with high tariffs against imports imposed from the time of Alexander Hamilton, to help foster America’s industrial development. Then huge grants of land to build railways in the 19th century not only opened up the West, they vastly increased productivity in agriculture. From catalog retailing to centralized meatpacking, the railways enabled innovations that spawned entire industries.

The government also played a crucial role on the other side of this transformation: bolstering workers’ human capital. From the Land-Grant College Act of 1862, which created a network of public universities, to the offer in the G.I. Bill of Rights to pay for the college education of veterans returning from World War II, the federal government invested aggressively in higher education.

In the early decades of the 20th century, local governments across the country poured money and resources into an impressive expansion of secondary education. Between 1910 and 1940, the high school graduation rate of American 18-year-olds increased to 50 percent from 9 percent.

Finally, the government directly created jobs — whether in the burst of infrastructure investment in the 1930s that gave us the Hoover Dam, among other huge projects, or the tenfold increase in federal spending from 1939 to 1945 as the government built up the military-industrial complex to fight Germany and Japan.

Why American politics turned against this successful model of pragmatic policy-making remains controversial. Perhaps it was the increasing footprint of money in politics, which has given more clout to corporate interests lobbying for smaller government and lower taxes. Maybe desegregation led to increasing distrust in government by white voters. Perhaps it was the combination of a recession and high inflation of the 1970s, which discredited interventionist government policies.

In any event, there is much the government could do.

Start with investment in the nation’s crumbling infrastructure: Lawrence Summers, once the top economic adviser to President Obama, never tires of repeating that this not only is urgently needed but is almost guaranteed to be profitable, given rock-bottom interest rates. While it might not increase employment by tens of millions, as these jobs tend to require high skills, even a relatively small number of construction jobs would provide a needed economic boost.

Then there are health care and education, critical sectors that are growing as a share of the economy and will provide many of the jobs of our future. For both good and ill, they are already deeply entwined with the government.

To be sure, that raises additional challenges: Republican governors refusing to expand Medicaid, for example. But it also offers an opportunity for the government to shape, through its power as a regulator and a contractor of private services, the kinds of jobs these industries will offer.

Why not insist that home health aides acquire a certain set of skills and be paid accordingly?

“The huge issue going forward is, are we going to care for the elderly with a bunch of minimum-wage workers or people with a better certification offering better care for better pay?” asked Lawrence F. Katz of Harvard University. “There is a potential win-win situation where workers and patients end up in better shape.”

Similarly, the government has enormous leverage to improve the quality of college education by tightening rules on for-profit universities that feed from the trough of federal funds.

A better path than funneling so much money to low-quality for-profits would probably be to help finance public universities and community colleges.

Not only would that improve the skills of American workers, which are stillconsidered among the poorest in the industrialized world, but it would also probably improve the wages and working conditions of teachers.

The good news is that the United States may have the best opportunity in decades to overcome its anti-government political biases. Donald J. Trump, the admittedly unusual Republican standard-bearer, has publicly called for extensive public investment in infrastructure. More orthodox Republicans, like the House speaker, Paul D. Ryan, are also expressing interest in using government levers to tackle the lack of prospects for so many American workers.

There are several levers available. The federal government could try to rebuild a quality bureaucracy, rather than subcontract so much of its work to expensive consultants and bottom-end contractors that employ the cheapest workers available.

It could invest more in research and development, which has flatlined over the past several years.

So what’s holding us back? The loss of a vision, once shared across much of the ideological spectrum, of what government can accomplish, when it is allowed to do its job.