Dear All,
Saudi Wahhabi mosques and schools worldwide have given birth to 95% of all international terrorist attacks since September 11th.
The Donald / Javanka relationship to the Saudis of more importance to the U.S. than the Russian follies. 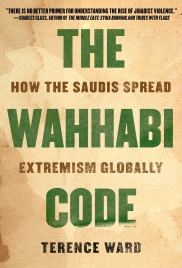 Last night we hosted a seminar on the Saudi Wahhabi dominance of ISIS, Al-Qaeda, Boko Haram and Taliban, cults of terrorist murder. The Saudi – Trump warring on Iran, a planned diversion for “rogue regime” misbehavior, especially as to Middle East and the Trump administration.
Terrence Ward, speaking last night, focused the crowd on his book “The Wahhabi Code” – how the Saudis spread extremism globally. Terrence tells of how, to reduce the Wahhabi clerics religious and social control of the Royal family, the Royals unleashed Saudi charities to fund Wahhabi schools, missionaries and mosques across the world. It is there institutions (65 in Brussels alone) from which the world wide terrorist attacks emanate.
It is this crowd the Trump / Javanka folk idolize and profit from. It is this crowd pushing for war with Iran. “Regime” changes seldom occur while wars rage. Trump, the strategist, gets this point. Forget Russia, China et al – the greatest treat to the democratic civilized world today is the Trump – Saudi bedfellow dance.
Asher Edelman

Saudi Arabia’s Interior Ministry said Tuesday, April 23, 2019, that 37 Saudi citizens have been beheaded in a mass execution that took place across various regions of the country. Saudi King Salman ratified the executions for terrorism-related crimes by royal decree. (Cliff Owen/AP)

Saudi Arabia said Tuesday it had executed 37 people convicted of terrorism-related offenses, bringing the number of executions there in the first four months of the year to 105, according to the Saudi interior ministry and Reprieve, a human rights group that tracks the use of the death penalty in the kingdom.