The social disaster of inequality is not only a social disaster, it is the roadblock to economic recovery. One cannot have 50% of the US population unable to support its needs for food, housing, medical care, child care, and education. We are a consumer society. Growth with 50% of our population unable to consume more than the basic less than minimal requirements for life will not sustain a growing economic environment.

NEW YORK, NY – MAY 15: People wait on a long line to receive a food bank donation at the Barclays Center on May 15, 2020 in the Brooklyn borough in New York City. The event was organized by Food Bank for New York City and included dairy and meat items. The sports arena in downtown Brooklyn, now closed, saw lines wrap around the block as New Yorkers struggle with unemployment and other financial stresses brought on by the COVID-19 outbreak. Across America, cities and towns are dealing with some of the highest unemployment rates since the Great Depression. (Photo by Stephanie Keith/Getty Images) 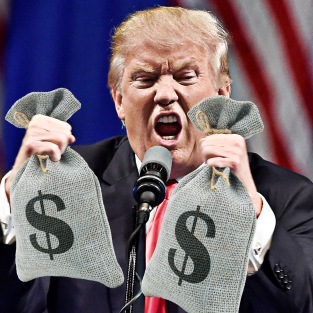 Financial Times
As economists debate the letter-form trajectory of the recovery ahead, it is not too soon to identify the letter shape of what has occurred so far. At best, it might be called a K-shaped recovery. While we panicked together in March, since then there have been two vastly divergent experiences.

For many large, global businesses, the Covid-19 pandemic seems like nothing more than a bump in the road towards greater dominance. Thanks to unprecedented central bank liquidity measures and investor enthusiasm, their stock prices haven’t just bounced; in some cases — especially in tech — they have gone on to new all-time highs. In addition, their access to the credit markets has never been better. Last week, for example, Amazon broke the record for the lowest interest rate for any bond in US corporate history.

For overleveraged, bricks-and-mortar retailers, though, the pandemic has brought the end. Neiman Marcus, JC Penney, Pier 1 and J Crew have all filed for bankruptcy this year. But they are hardly alone. With each new day more and more high street shops and restaurants are closing. Reeling from the lockdowns, they now recognise that, even with government support, customers will not return in time to save them.

More troubling, though, has been the K-shaped consumer experience. For the wealthy and those able to work from home, the pandemic has represented an inconvenience. Life has gone on, albeit challenged by new technologies and new routines. Their lives have not been upended by the outbreak.

That has not been the case for those outside the work-from-home bubble. Service workers have been laid off en masse, while many essential workers have had little choice but to work even as their employers have awkwardly and inconsistently adapted workplaces to a pandemic environment. That the outbreak has hit working-class communities hardest is hardly a surprise.

Put simply, the haves are largely back to where they were before the outbreak, while, despite unprecedented fiscal and monetary policy action, the have-nots have even less. For most of the world’s largest companies, the wealthy and the work-from-home crowd, there has been a bungee jump-like rebound in confidence. Meanwhile, for small businesses, the clearly overleveraged, the working class and many in essential roles, conditions have deteriorated further.

Many will suggest that the experience is nothing new. The past decade has been a slow-motion K-shaped recovery from the 2008 financial crisis. But that understates the gap in confidence that has evolved. Today, there are small schools of the overconfident floating naively atop a vast swirling sea of underconfidence. What Covid-19 has done is create a tipping point where, for many, chronic underconfidence has turned to hopelessness. They don’t see a recovery ahead.

For businesses, there is an orderly process for handling this. Companies close and file for bankruptcy. Losses are tallied and neatly allocated. While emotion filled, the end — when it comes — is procedural. For individuals, though, there is no perception of order. The hopeless feel powerless and unheard.

The massive, global social protests in the wake of George Floyd’s killing speak to the powerlessness and voicelessness intensely felt not only by the US African-American community, but also by many others. The two paths of the K-shaped recovery have diverged too far.

Unless confidence is restored, the unrest will continue. We act as we feel. As Martin Luther King Jr said: “A riot is the language of the unheard.”

With many public support programmes nearing an end, and financial markets pricing in a V-shaped recovery, policymakers would be wise to consider the divide that now exists. We must address the adverse consequences of the K-shaped recovery or they could easily lead to an L-shaped recovery for all.