Regardless of your political views I call on you to pressure those who represent you from the town you live in up to the house and senate to fix this NOW. It is not decent or even rational to allow the world’s children to starve. The United States, richest nation in the world, must lead the charge to alleviate this horrendous situation.
Asher
P.S. Please circulate this article to all of your friends even your opposition. 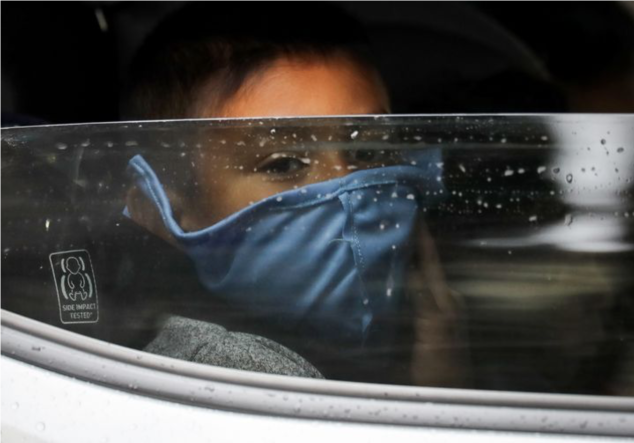 Three in 10 Black families are struggling to feed their children, and there’s no sign of relief in sight.
by Emily Peck
The Huffington Post

Nearly 14 million children in the United States went hungry in June, as the economic fallout from the pandemic continued to batter families. That’s an increase of more than 10 million since 2018, and nearly three times the number of children who went hungry during the Great Recession, according to an analysis of Census data released by the Hamilton Project on Thursday.

The food crisis shows no signs of abating, either, as COVID-19 cases continue to rise, the relief measures implemented by the federal government in March are set to run out in a few weeks, and it’s not clear whether children will go back to school, where many get fed.

“It’s pretty bad and it’s not getting better,” said Lauren Bauer, an economic fellow at the Brookings Institution who conducted the research.

Typically, children are fed even in families that are really struggling; parents will go hungry in order to make sure their kids are eating.

“If you’re not able to feed your children, it’s a pretty severe signal about your household’s capability to deal with financial shocks,” said Bauer. Most of these families have run out of cushion to deal with the economic pain wrought by this pandemic.

The data relies on a survey conducted by the Census in June that asks households struggling to afford food whether, over a seven-day period, the children in their home are often or sometimes not getting enough to eat.

A stunning 16.9% of households said they were struggling to feed their children. Bauer then estimated how many children are living in those households, and examined their demographics.

The numbers are even worse for Black families, 30% of which are struggling to afford food right now. The rate for Hispanic households is 25%. The struggle to feed children is yet another way the coronavirus crisis is hitting people of color disproportionately harder.

The unemployment rate was 11.1% in June — lower than in May but still historically high — and some believe that number doesn’t truly represent job conditions currently, as many businesses have been forced to close again to deal with the resurgence of the virus.

Relief checks cut in late March helped many Americans buy food and necessities, but given how quickly the neediest households spent that money, it’s likely long gone by now. And at the end of the month the beefed up unemployment insurance passed through the CARES Act expires, too.

Even parents with jobs are struggling to pay for food. Many relied on meals provided by their children’s school to help alleviate the cost of groceries; in an ordinary year, children’s rates of food insecurity go up in the summer, Bauer said.

But the school backstop is gone. Parents are struggling to buy more food with kids at home and it’s looking unlikely that things will go back to normal in September. For example, the country’s largest school system, New York City, just announced that children will only be attending school in person one to three days a week.

Meanwhile, food generally has gotten more expensive. The average cost of groceries has gone up by nearly 5% — and as much as 10% for some categories of food like meat, eggs and dairy — over the past year, according to federal data, because of massive shifts in how we’re eating because of the pandemic. Demand for food in grocery stores went up and food suppliers weren’t prepared for the change. The rise in food prices hit lower-income families harder, too: Not only did everything cost more, but it is more difficult to bargain-hunt when you want to reduce your exposure to a virus.

None of this is surprising. As soon as schools shut down, activists and policymakers sounded the alarm. The stimulus also provided for food vouchers for kids who typically got food at school. And Congress did expand SNAP, the Supplemental Nutrition Assistance Program (aka food stamps), as part of the Families First Coronavirus Response Act it passed in March.

But the expansion didn’t really expand benefits for everyone. Because of a Trump administration decision, those already receiving the maximum amount of food assistance — $509 a month for a family of three — got nothing more.

That affected an estimated 5 million children.

The Trump administration essentially prevented the expanded benefits from going to the neediest households, Bauer said. The move stands in sharp contrast to actions taken at the federal level to expand food benefits during the Great Recession, which kept a lot of people from going hungry.

All of these benefits are set to run out soon, and Congress so far has shown little sign of doing anything.

There are relatively simple policy solutions to the problem of kids going hungry. Nothing new has to be cooked up, policymakers simply need to expand food stamp benefits through the fall and re-up the program that gives food vouchers to those who aren’t able to go back to school, said Bauer.

But so far, there’s been little attention on the issue. Instead, the media spotlight has focused on relatively well-off middle class families who are struggling with their children being at home instead of at school.

“There’s a real black hole here where the microphone has been given to people like me, frustrated by having to watch their kids while working from home,” said Bauer. “But my kid is fed.”