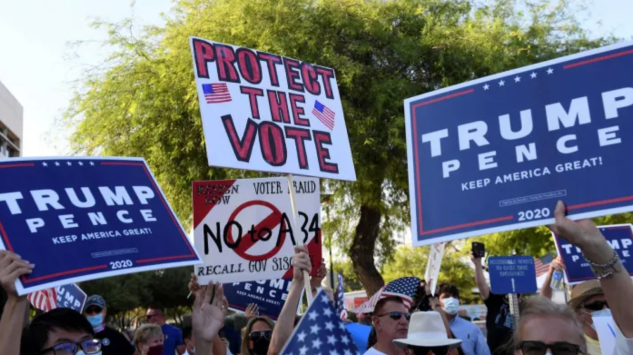 It has long been clear that the only restraints on Donald Trump’s actions are the courts and the American people. Republicans have largely failed to act as a check on the US president, even when he is traducing the principles they claim to hold dear. One of these is the US constitution’s provision for a presidential election every four years.

A few Republican heads made rare appearances above the parapet recently after Mr Trump mused about delaying the November election. That was encouraging. He has no authority to postpone an event that has taken place without fail, including in the throes of the US civil war and two world wars. Yet they are willing accomplices in Mr Trump’s backdoor efforts to make it as hard as possible for Americans to exercise their right to vote. A suppressed turnout could prove as bad as a delayed election.

Of these, the most worrisome is Mr Trump’s assault on mail-in balloting, which he repeatedly describes without evidence as “fraudulent”. Amid a pandemic it is critical that voters be given an alternative to standing in long queues for crowded polling stations. Without a well-functioning US postal service, votes may not be cast, or arrive too late to be counted. Yet Louis DeJoy, the recently appointed postmaster general, who runs the USPS, is taking steps to make postal voting harder.

He has tripled the fee on mail-in ballots, eliminated overtime for USPS deliverers, which has slowed service across the country, and removed from their positions 23 senior executives last Friday. Unlike Mr DeJoy – a generous Trump donor with no experience in the service – the ousted executives are career USPS managers. Moreover, Republicans are blocking a congressional relief bill that would increase funding to the cash-strapped USPS and help to ensure timely ballot deliveries in November.

The risk to the integrity of the US presidential election cannot be overstated. Beneath the radar are a thousand other efforts to make voting, and counting the votes, harder. Among these are state and local measures that would prevent ballots that arrive after polling day from being counted. Legislatures are denying funding for the tens of thousands of officials who need to be trained in how to count absentee ballots. They are also making it easier to reject ballots as fraudulent. Florida’s notorious battle of the “hanging chads” in 2000 could look like child’s play compared to the legal challenges that are being drafted across the US.

The net effect is likely to be widespread confusion. Ballots could take days or weeks to count. Should the election be close, it might take until Thanksgiving or beyond to know the result. And that assumes that efforts to stop the counting would fail in the courts, which is not assured.

Can America avoid an electoral train wreck? In the absence of a landslide for Joe Biden or Mr Trump, the chances are high that the outcome would be murky. That would benefit Mr Trump, who has the vast powers of incumbency. At this late stage it is hard to see how the country’s panoply of state, county and municipal election systems can agree on a roughly common treatment of mail-in ballots, let alone universal postal balloting. Just five states provide for that.

There is no mystery as to why this is happening. Polls show Mr Trump heading for defeat. He is thus casting doubt on the election – deeming it in advance the most “fraudulent” in US history and a “coup” in the making. His efforts to muddy the waters and invalidate absentee ballots are deeply un-American. They should be repugnant to any who call themselves conservative.