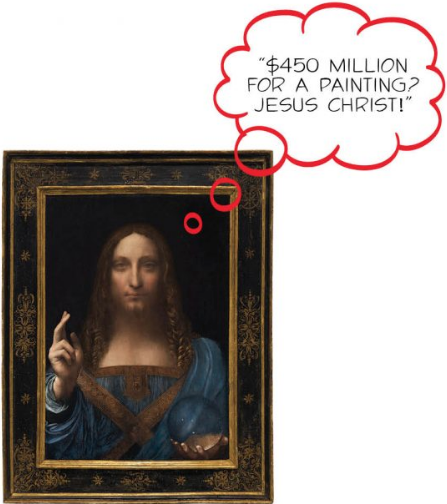 Leonardo di ser Piero da Vinci, master of the 15th and early 16th centuries, recently resurfaced as a 21st-century bonanza. Salvator Mundi, a secondary early Renaissance painting by the master, repainted extensively in our century, sold for $450 million to a buyer bidding for the quaint little fortress of Abu Dhabi. It’s to be put on permanent display in its not-so-quaint (nor little) Western art museum, the Louvre Abu Dhabi, in perhaps the most stupendous example of ego-driven activity in the history of the art market. More than art, this new Louvre displays most of all the need to pay more than one’s neighbor for freshly minted contemporary art.

Mundi, contemporary by virtue of its restoration, has been sufficiently repainted to be classified a 21st-century masterpiece. Or perhaps its status derives from the price paid by a secondary Gulf state for a secondary rendition of Jesus “attributed” to the greatest artist of his time (and the greatest restorers of ours).

Thus, the reigning top echelon of the art world, the ego-driven sector where the 1 percent (sovereign division) and the 1 percent (wealthy division) raise their hands to show their mine’s-bigger importance, becomes the laughingstock of serious art connoisseurs. Not only because of the excessive pricing, but also because much of what they buy isn’t even first-rate. Well, okay, it’s not first-rate art but it is first-rate marketing.

Wealth is not typically a product of stupidity, nor do its possessors wish to be viewed as fools. But when mockery reveals yesterday’s ego-driven one-upmanship as today’s buffoonery, some of the less-stupid actors start getting the point.

The ego market is the art market we read about. Clearly, it’s been going up, but in the last few years the broader art market has been going down and suffering a secret liquidity crisis. The buffoon-driven market is sure to fall, too, and soon.

The sources of capital for high profile purchases are drying up. Mega-wealthy Chinese collectors openly admit they will no longer raise their paddles at Western art auctions. Money export controls and fear of government retribution have made public displays of ostentation serious no-nos in the People’s Republic.

Russian sanctions current and future, a stumbling economy, and increased scrutiny of money laundering have all but ended high-profile Russky art buying, too. In fact, Roman Abramovich, the biggest Russian buyer of Western contemporary art, and considered a close collaborator of Putin, has checked out of the market along with most of his oligarch comrades.

The professional speculators pulling the strings of the buffoons are savvy. They lead the market—they don’t follow it. The Warhol-Basquiat-Wool-Prince cabal have been selling on balance for quite a while, counting on dupes outnumbering sellers to ensure their continued profits. Unlike auction houses, dealers have had neither the liquidity nor the bad sense to allow participation in the battles of the buffoons—and they will not start now.

Then, there are the genuine collectors. One of our wealthiest hedge fund managers, who is also a great collector, committed to art but savvy as to markets, has been a constant seller in the last year or so. If I were to bet on anyone being right on the market, he’s my man.

The top of the art market is due for a serious correction, and a drying up of liquidity not dissimilar to its 1989–1995 crisis, when art prices grew by more than 150 percent before sharply declining, setting off several years of stagnation that left dealers and auction houses staggering. The market as a whole has been down for at least three years. One missing bidder saying no might move the market to calamity. A night of guarantees hit can turn the whole upper market on its bottom.

Factor buy-ins at auction and the poor performance of private secondary market sales into the art indexes, and one sees a continuous downward trend. But it will take a market crisis of duration to bring the markets back. Over 50 percent of the world’s galleries are said to lose money. The gallery-closing velocity increases markedly month by month. And the real storm has yet to begin.

Trump and his coterie have no interest in art. Donald prefers the big, fake Renoir hanging in his apartment to the real deal in the Art Institute of Chicago. Cuts in federal spending for the arts, the adverse effects of the new tax bill and the plain old bad taste of our leader and his gnomes have already begun to injure the art world.

Trump is in good company, at least. Crooks, fraudsters, fakers, defaulters, forgers, and criminals abound. To quote Judge Charles Edward Ramos of the N.Y. State Supreme Court in the case of Sotheby’s v. Shagalov: “I have never seen an industry more ripe with fraud and misconduct than the art business. To say there’s such a thing as artistic ethics is an oxymoron. Most of the cases I’ve had involving art dealers involve fraud outright, just plain old fraud.”

At my art advisory company, we receive more and more inquiries as to the efficacy of transactions and the honesty and ethics of dealers. The feds and local constabulary are onto the bad art crowd. The media is hungry for these stories. This is not a short-term plus for the market but, instead, a long-term cleanup that will bring transparency and disclosure and a rebirth for markets, collectors, connoisseurs and art lovers.

The end buyer of Leonardo’s ‘Salvator Mundi’, Saudi Crown Prince Mohammed Bin Salman, whose regime was criticized for the purchase, quickly traded the work to Mohammed Bin Zayed, defecto ruler of the United Arab Emirates, for a large yacht. A great idea for some of the other players in the “ego-market”. Just think one can trade for large houses in the Hamptons, Aspen, Palm Beach or even a simple apartment on the 100th floor of a NYC 57th street condominium. Finally, a rational reason for buying modest works of art at immodest prices. Does this foretell the next bull market, probably not!

How did this remarkable event transpire? It seems that both Mohammed Bin Salman and Mohammed Bin Zayed were concerned that their enemy, the Qatar royal family, headed by Emir Sheikh Tamim bin Hamad Al Thani, would be the buyer of “Salvator Mundi”. As the rulers of Saudi and Abu Dhabi did not discuss the matter between themselves, they ended up bidding against each other rather than against Qatar. The Al Thanis had actually been offered the painting a year earlier for 80 million but decided against purchasing the work – could it have been the extent of the restoration? The Saudis and Abu Dhabis, while trying to enforce sanctions imposed on Qatar actually bought “Salvator Mundi” for 450 million. “Wealth is not typically a product of stupidity…” This case, an exception? Perhaps mockery and the humor of “Salvator Mundi” purchase will remind the more intelligent players in the ego directed market of its risks.