The Paranoid Style in G.O.P. Politics

Republicans are an authoritarian regime in waiting 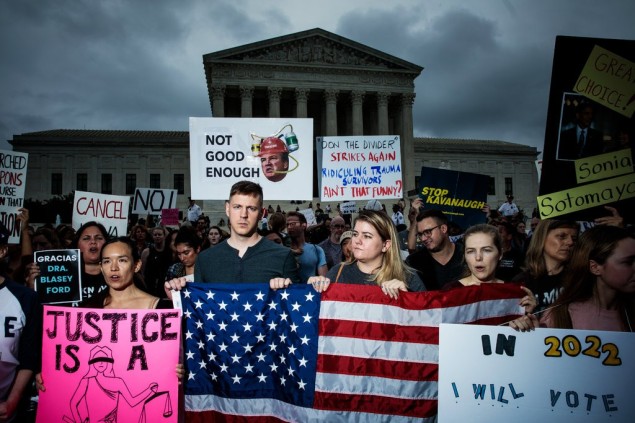 Many people are worried, rightly, about what the appointment of Brett Kavanaugh means for America in the long term. He’s a naked partisan who clearly lied under oath about many aspects of his personal history; that’s as important as, and related to, the question of what he did to Christine Blasey Ford, a question that remains unresolved because the supposed investigation was such a transparent sham. Putting such a man on the Supreme Court has, at a stroke, destroyed the court’s moral authority for the foreseeable future.

But such long-term worries should be a secondary concern right now. The more immediate threat comes from what we saw on the Republican side during and after the hearing: not just contempt for the truth, but also a rush to demonize any and all criticism. In particular, the readiness with which senior Republicans embraced crazy conspiracy theories about the opposition to Kavanaugh is a deeply scary warning about what might happen to America, not in the long run, but just a few weeks from now.

About that conspiracy theorizing: It began in the first moments of Kavanaugh’s testimony, when he attributed his problems to “a calculated and orchestrated political hit” motivated by people seeking “revenge on behalf of the Clintons.” This was a completely false, hysterical accusation, and making it should in itself have disqualified Kavanaugh for the court.

But Donald Trump quickly made it much worse, attributing protests against Kavanaugh to George Soros and declaring, falsely (and with no evidence), that the protesters were being paid.

And here’s the thing: Major figures in the G.O.P. quickly backed Trump up. Charles Grassley, chairman of the Senate committee that heard Blasey and Kavanaugh, insisted that the protesters were indeed employed by Soros. Senator John Cornyn declared, “We will not be bullied by the screams of paid protesters.” No, the protesters aren’t being paid to protest, let alone by George Soros. But to be a good Republican, you now have to pretend they are.

What’s going on here? At one level, this isn’t new. Conspiracy theorizing has been a part of American politics from the beginning. Richard Hofstadter published his famous essay “The Paranoid Style in American Politics” back in 1964 and cited examples running back to the 18th century. Segregationists fighting civil rights routinely blamed “outside agitators” — especially northern Jews — for African-American protests.

But the significance of conspiracy theorizing depends on who does it.

When people on the political fringe blame shadowy forces — often, as it happens, sinister Jewish financiers — for their frustrations, you can write it off as delusional. When people who hold most of the levers of power do the same thing, their fantasizing isn’t a delusion, it’s a tool: a way to delegitimize opposition, to create excuses not just for disregarding but for punishing anyone who dares to criticize their actions.

That’s why conspiracy theories have been central to the ideology of so many authoritarian regimes, from Mussolini’s Italy to Erdogan’s Turkey. It’s why the governments of Hungary and Poland, former democracies that have become de facto one-party states, love to accuse outsiders in general and Soros in particular of stirring up opposition to their rule. Because, of course, there can’t be legitimate complaints about their actions and policies.

And now senior figures in the Republican Party, which controls all three branches of the federal government — if you had any questions about whether the Supreme Court was a partisan institution, they should be gone now — are sounding just like the white nationalists in Hungary and Poland. What does this mean?

The answer, I submit, is that the G.O.P. is an authoritarian regime in waiting.

Trump himself clearly has the same instincts as the foreign dictators he so openly admires. He demands that public officials be loyal to him personally, not to the American people. He threatens political opponents with retribution — two years after the last election, he’s still leading chants of “Lock her up.” He attacks the news media as enemies of the people.

Add in the investigations closing in on Trump’s many scandals, from tax cheating to self-dealing in office to possible collusion with Russia, all of which give him every incentive to shut down freedom of the press and independence of law enforcement. Does anyone doubt that Trump would like to go full authoritarian, given the chance?

And who’s going to stop him? The senators parroting conspiracy theories about Soros-paid protesters? The newly rigged Supreme Court? What we’ve learned in the past few weeks is that there is no gap between Trump and his party, nobody who will say stop in the name of American values.

But as I said, the G.O.P. is an authoritarian regime in waiting, not yet one in practice. What’s it waiting for?

Well, think of what Trump and his party might do if they retain both houses of Congress in the coming election. If you aren’t terrified of where we might be in the very near future, you aren’t paying attention.